The other day I found myself stopped in my tracks. I stood there staring wide-eyed in disbelief as my 5 year old kept wailing in despair to ‘please just have fruit snacks for breakfast’ (it was dinner time).  The lights in the living room were flickering on and off, because my 7 year old (who loves to watch ceiling fans) was flipping the switch up and down repeatedly while sporadically and psychotically screaming “STOP IT!!!” to his crying brother.  And my 1 year old – who had just thrown the tantrum of the century 5 minutes earlier because I wouldn’t let him eat rocks – was refusing to eat the wholesome cooked goodness I placed before him, as if it were poison.

And it’s a far cry from what I had in mind.

I grew up helping babysit and playing with my 20+ nieces and nephews. I was a nanny for 2 different families. One of which had 5 kids ages 2-12, and I walked away from that unscathed!!! So, naturally, I thought I was some kind of seasoned veteran who was going to slay this whole motherhood thing.  *Brush off shoulders*.

And then the Universe laughed at me.  That girl’s getting pretty cocky… better do something about that.

That must have been what happened, because there is little to no resemblance between my reality and what I had pictured in my mind.  Even pregnancy!  What a train wreck…

I knew women got sick when they were pregnant, but it was just morning sickness and it totally goes away after, like, a few weeks, right? And the rest of the pregnancy is all sunshine and roses, and you look adorable with your cute baby bump and that imminent pregnant ‘glow’.

Wehehehelllll. Sick I got.  So sick.  And 9 months later, I WAS STILL SICK!! But somehow, miraculously, I still managed to gain 45 pounds.  Seems fair.  So, instead of this adorable little mom-to-be who hadn’t gained an ounce anywhere else other than her bump – who smiled endlessly because being pregnant was like, THE BEST THING EVER – I was this vomitting, incontinent, whale-ogre, whose husband sincerely complimented her one day when he noticed she brushed her hair.  “You look so pretty!  Did you brush your hair today?”  True story. 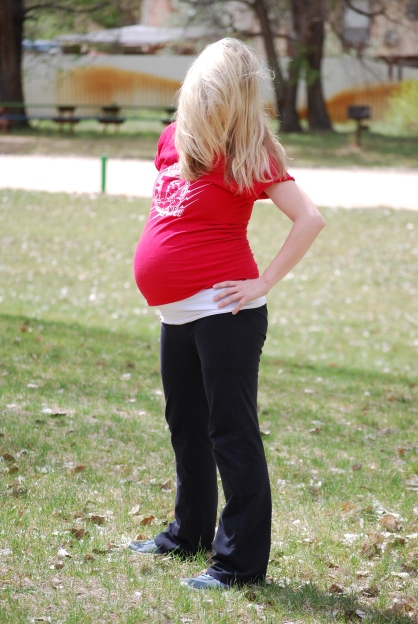 But that’s okay, right?  Because once the baby gets here, all this discomfort and ugly will be behind me.

How is it that, with 4 older sisters and a mother who bore NINE CHILDREN, I was completely oblivious to the joyous after math of delivering a baby?

Didn’t they just come out and you’re done?  Wait…..the placenta doesn’t stay in there?  You want me to birth that out too?  Gross.  Yeah, I guess it’s okay if you stick your needle down there and give it a little stich-a-roo.  Didn’t know I was going to tear, but it’s fine…

And sure, the young male intern can watch.

Is it normal to still be bleeding this much, and why am I afraid to poop?

I still look pregnant….WHY DO I STILL LOOK PREGNANT???!!

To be fair, this is nobody’s fault but my own.  Most women do their research.  They’re prepared.  They paid attention in biology class.  I just said, “Let’s have a baby!”, and hoped for the best.

And why, for the love, did no one bother to tell me that breastfeeding actually feels like someone is running a serrated knife over a third degree burn wound?  ‘Oh, that’s normal – your nipples will adjust in 6 weeks and it won’t be painful anymore….’

Then punish her for persevering by making the all of her babies allergic to everything she eats.

Bens didn’t cry one time in the hospital, but I think he was just saving up all his strength so he could do it endlessly at home.  He had reflux and allergies to milk and soy, so he was pretty uncomfortable.  However, beyond that, we noticed from a very young age that something else was off.

At six weeks he wasn’t smiling like most babies do, but I was told it could take up to 2 months.  2 months came, and he still wasn’t responding to us with a smile, so I became a little concerned.  Finally close to 3 months, he started giving us a teeny tiny bit of something, but you really had to work for it.  I had 2 siblings and a close friend who all had babies within weeks of Bens, and theirs were all so interactive at this point! His pediatrician assured us that as long as we saw SOME smiles and interaction, there was nothing to worry about.  And I guess, in a way, she was right; worrying wasn’t going to change who Bens was.  We noticed he was responding erratically to noises; Sirens, thunder, parades, gunshots (recreational target shooting), so we put some sound reducing ear covers on him and adapted. We didn’t quite understand the freak out episodes at the the park when another toddler would approach him, but maybe it was just a phase?? Regardless, things seemed to be going okay for him at the moment. We decided to get pregnant again so our kids would be 2 years apart and Bens would have a little buddy – because…. that’s what you do right?  And SURELY I wouldn’t be as sick this time around – how cruel would that be?!

Well. I bet you can guess how that went.  Although, this time around I only threw up for the first 7 months and gained 25 pounds instead of 50, so…..I guess you could say the universe cut me a little slack this time. #blessed

So our little Tan Man came, and the whole process wasn’t a big shock, and I was prepared to feel the pain of a thousand fiery nipple darts, and blah blah blah, I’d done this before, so it’s going to be great. Two months later we got a diagnosis on B.

Are you guys seeing a theme here?  I had all these expectations of what motherhood would look like, and I repeatedly found that my reality paralleled very little of those expectations.

Now, I want to take a second and make sure everyone is aware that I recognize my blessings.  B’s Autism is not severe – he is very high functioning. Everyone in my family is physically healthy (for the most part). We have a home, reliable vehicles, friends and family who love us, and a job that supports us.  I understand that people all around the globe have it far worse than I do, and I’m not trying to throw a pity party here.  However, I want to illuminate the fact that I (along with many other people) found myself living this completely different and slightly more difficult reality…..and I wasn’t prepared for any of it.

I didn’t know I was going to have to take up a sudden interest in ceiling fans and pretend endlessly to eat up every bit of information my son yearns to tell me about CEILING FANS.  I didn’t think I’d still be pulling up my 2nd grader’s pants in the bathroom, because there is no force strong enough to make him unplug his ears while he’s in a public restroom – because the toilets are just too loud.

I wasn’t expecting to be sick the entire time with all my pregnancies.  And who would have guessed that all three of my children would have food allergies and colic – progressively worse with each one? My easy(er) happy middle child up and decided to be emotionally out of control – to the point where it’s concerning.  Didn’t see that one coming.

Above all, I was NOT anticipating that my depression and anxiety would become more intense as a mother….and I sure as hell didn’t think I’d be grappling with an eating disorder at this stage in my life.  I was also astonished by how profusely I could swear and how enraged I could feel, but, hey!  I guess I’m just full of all sorts of fun surprises 🙂

*Important to me to note, that the swearing is under my breath, inside my mind, or behind closed doors. And the enragement is contained and disguised by a forced smile and deep breaths while World War III ensues inside.*

So here I found myself, stuck.  Unable to let go of that ‘picture perfect’ life I had envisioned for my husband and myself.  Then, about a month ago, I read an article that changed my perspective on things, and my focus started to shift a little. I realized I was spending way too much time dwelling on the ‘Should have been’ and the slight injustice of it all, rather than accepting my reality and moving onward and upward. And, in order to do that, I needed to fully let go of my previous expectations and adapt to the norm.

I want to share this short story that illustrates what it’s like to realize that your current situation looks nothing like the plans you had for yourself.  The woman who wrote this was describing what it’s like to have a child with special needs – but I feel like it’s applicable to anyone who finds their life took a complete detour from the route they had mapped out for themselves. 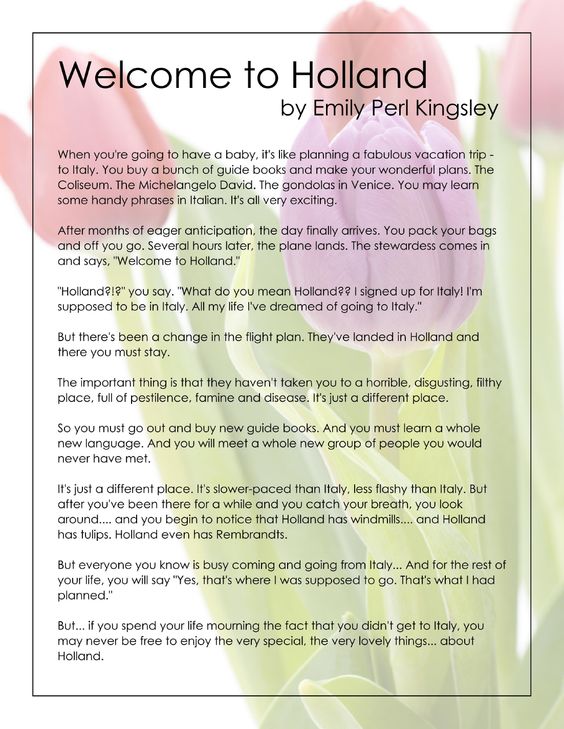 If your life is a complete 180 from what you had planned, I hope you can still find the beauty in the detour – because it exists. And if you can train yourself to focus on that beauty (and your blessings) – even in it’s smallest form- you’ll notice a subtle change.  The bitter will slowly relinquish it’s place in your heart as appreciation begins to set up camp.   You’ll be surprised at how strong you really are. You’ll adapt, you’ll learn, and you’ll grow.

And who knows – maybe you’ll even learn to love this new revised version of your story.

*You can read the previously mentioned article on expectations HERE. *

I love to laugh 🤣 I've had my share of psychological experiences, from which I'm learning and growing all the time! I'm all about finding the beauty in the mess of it all and embracing my imperfections and true self! I am a mother to 3 kids and an ambassador for all things humorous and authentic. Ask me anything, and I will tell you ☺ View all posts by shawneepulse

Why I started Perfect is Boring